Because I didn't know I was going to write a review on this flight, I didn't take any photos of the lounge (thousands apologies

) but I'll walk you through it.  As a business guest, you'll be entitled to use the Qantas business lounge located after security and duty free shops.  The lounge could get busy at times due to various Oneworld flights departing roughly at the ame time - Cathay Pacific to Hong Kong and a couple of Qantas flights to different Australian capaital cities.  Alternatively, you can choose to use the Emirates lounge just next door thanks to QF and EK's partnership.🤭🤭🤭 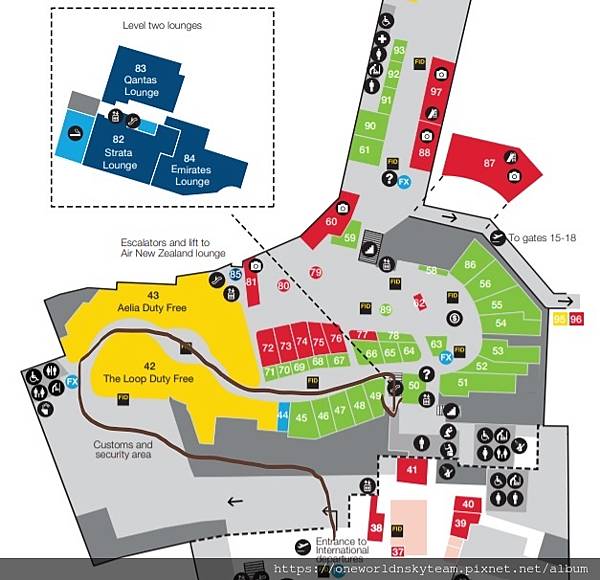 Follow the brown markings in the map above until you reach the arrow head, then you'll see the lounges.  Don't miss the turn that takes you to the escalators.

Taking us to Sydney today was an A330-200 aircraft, which is the commonest aircraft on this particular flight.  Qantas also utilises the smaller 737s on early and late night flights on this route.  As the 'genuine' business products are only on the A330s, be sure to check the aircraft being used on the flight when you're booking online.

On the booking page, the aircraft type is listed at the last row.  QF143 is normally operated by the A330 but due to the COVID situation, the smaller 737s are currently in use for all trans-Tasman flights 😭😭😭 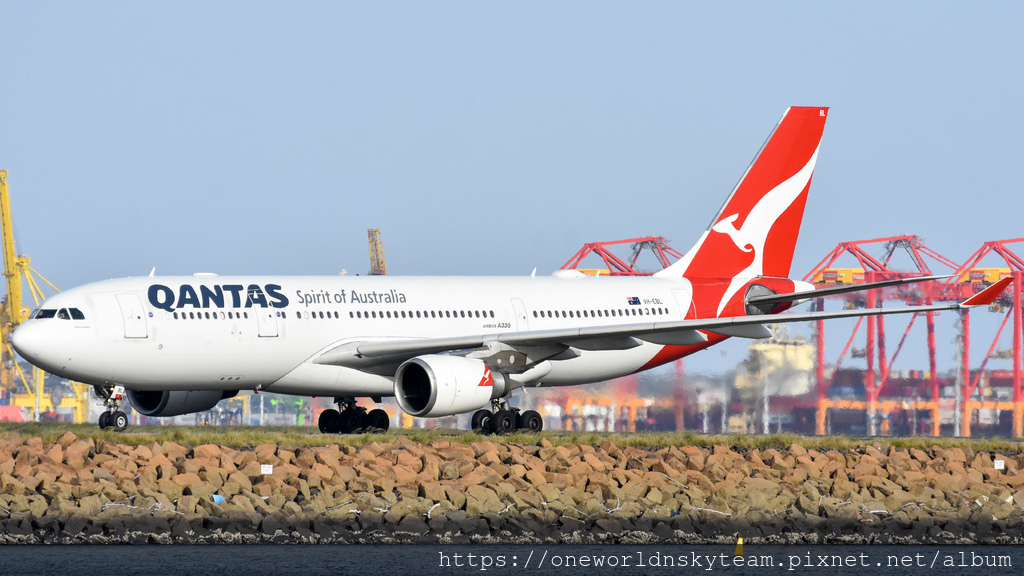 Above: This would be the aircraft type that we'll be flying on today. (Photo for illustration purposes only, it isn't the actual aircraft that was flown on)

Something worth noticing is that even on the same aircraft type, there are 2 different configurations, as shown below:

The main difference here when business class is concenred is that in row 7, there is only 1 row on either side of the window; whereas on the other configuration, there are 2 rows on both sides of the window.  It would worth the time to pull out the seat map while picking your seats to make sure you've got the seat you want, as the seat maps above are a more accurate representation of how seats are laid out than the one you'd be provided during the booking process.  For me, I'd pick row 7 if I'm flying on one of the aircraft with only one row on the window as that gives me more privacy and serenity on that tiny business cabin.  Although a bassinet is placed behind it, I reckon it would worth the risk for the privacy.  When flying on the other A330-200, I'd pick any window seat in the main cabin simply because I wouldn't want to risk having a crying baby right behind me as there is where the bassinet is placed and no more privacy in economy.

As mentioned before, the A330s have the genuine business products, and this is how the seat looks like: 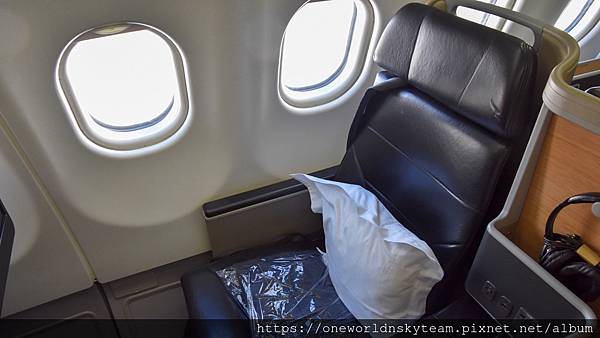 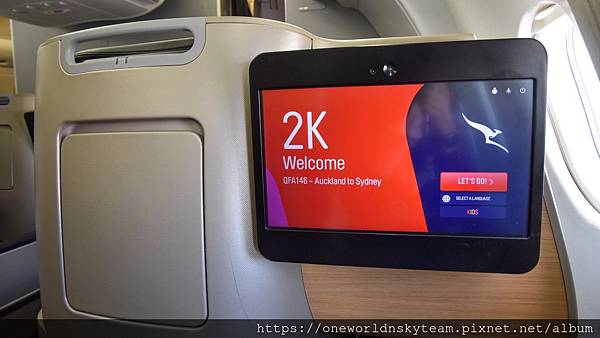 The seats are padded with leather, which is a feature that differs from the larger A330-300 variant, where you'll find seats padded with fabrics.  I don't have a personal preference with the material itself but a leather-coated seat gives a general feeling of being more high class.

There is a wide HD LCD screen but since there's no remote control, you'll have to bend your body forward in order to control the screen.  As you may've noticed in the picture on the left, a pair of noise-cancelling headphones is provided.

Reading materials can be found within the tray next to the screen.  Seat controls, an universal power outlet as well as an USB charging port are located next to your seat. 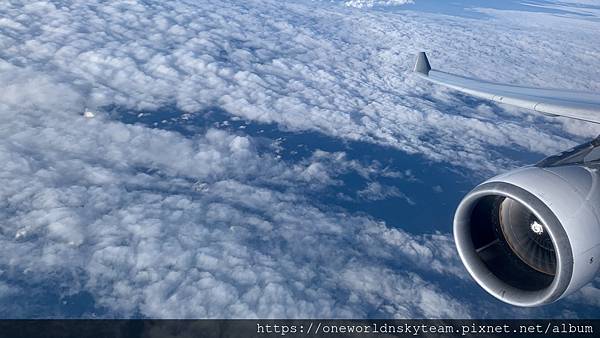 Above: the view not long after takeoff

Soon after takeoff, the cabin crew handed out an incoming passenger card for entry into Australia as well as an express security pass, though I kept it as a souvenir.  Afterwards, meal service commenced. 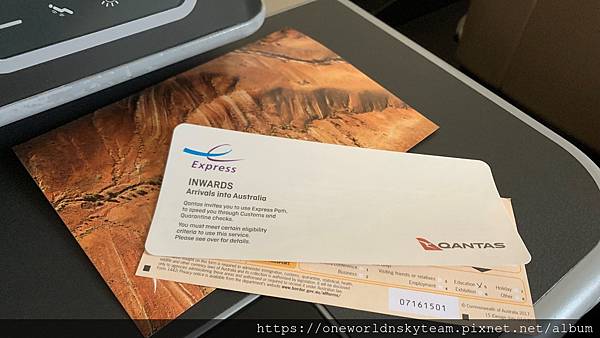 A 3-course lunch was served on this flight followed by a cup of tea or coffee.  To start with, a choice of bread and a bowl of salad with green leaves with balsamic vinaigrette were served. 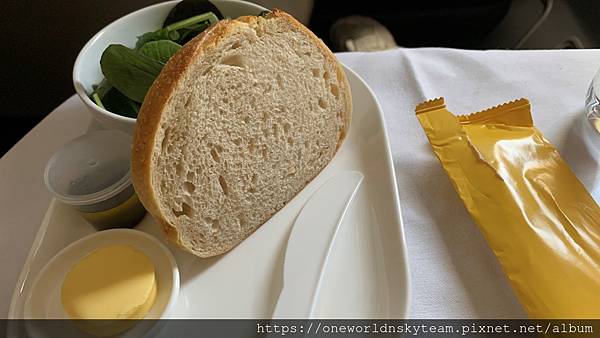 Not being snobby but plastic cutleries in business class just doesn't look good.🤪🤪

Main course was a selection of 3 choices, I chose the pappardelle with pork, rosemary and tomato ragout and parmesan 🍝🍝 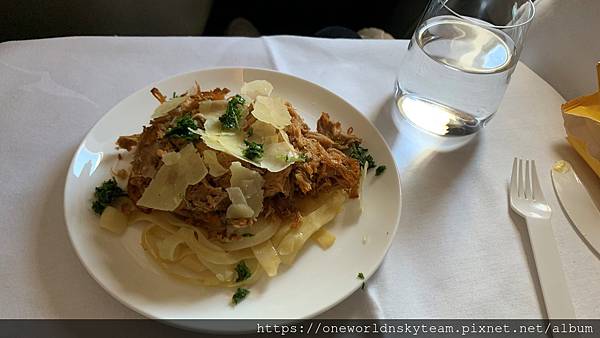 After the main course was finished, the cabin crew came and handed out this plate of cheese and crackers but I was too full to finish the whole plate so I only had a few bites.🧀🧀 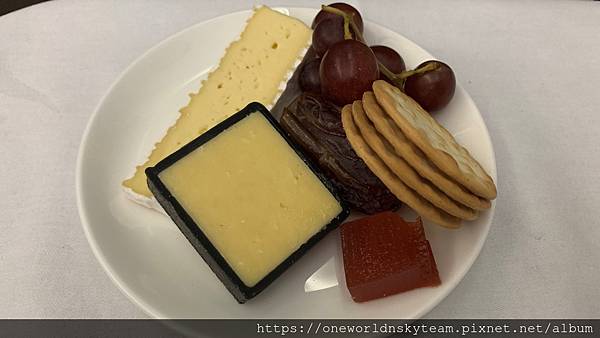 45 minutes after meal service had finished, we commenced our descent into Sydney, where our 2.5-hour journey had ended.